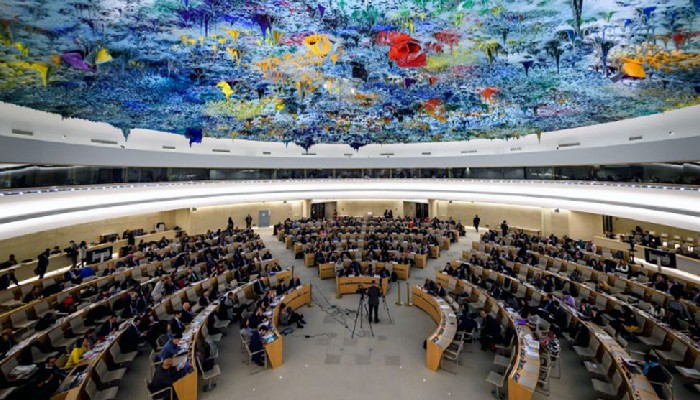 UNHRC in Geneva-Image for representational purposes

India has hit out at the United Nations for leveling “baseless and unwarranted” charges of “judicial harassment” against journalist Rana Ayyub, stating the country upholds the rule of law and that “no one is above the law”.

“Allegations of so-called judicial harassment are baseless & unwarranted. India upholds the rule of law, but is equally clear that no one is above the law,” the Permanent Mission of India in Geneva tweeted on Monday in response to the UN Human Rights Council’s allegations.

India also made it clear to the Human Rights Council that “advancing a misleading narrative only tarnishes the UN’s reputation.”

The Geneva-based UN Human Rights Council claimed that the journalist had been subjected to “harassment by the Indian authorities in relation to her reporting for a number of years.”

“On February 11, for the second time in six months, Ayyub's bank account and other assets were frozen in response to seemingly baseless allegations of money laundering and tax fraud, related to her crowd-funding campaigns to provide assistance to those affected by the pandemic. As with many of the spurious and defamatory accusations made against Ayyub in retaliation for her reporting,” UN Human Rights Council’s empanelled experts identified as Irene Khan and Mary Lawlor said.

The experts were citing the Enforcement Directorate's probe into Ayyub over the alleged misutilisation of funds collected by her.

Investigating the money laundering case, ED officials claimed that the funds were raised in a completely pre-planned and systematic manner in the name of charity. The agency alleged that the funds raised by Rana Ayyub were not utilized completely for the purpose that they were intended for.

The Permanent Mission of India in Geneva, taking a dig at UN Human Rights Council’s empanelled experts’ observation in Ayyub case, said, “We expect SRs to be objective & accurately informed.”

As per sources, a note verbale will be issued by the Permanent Mission of India in Geneva.

“They will also take it up with the UN Office in Geneva,” sources said.