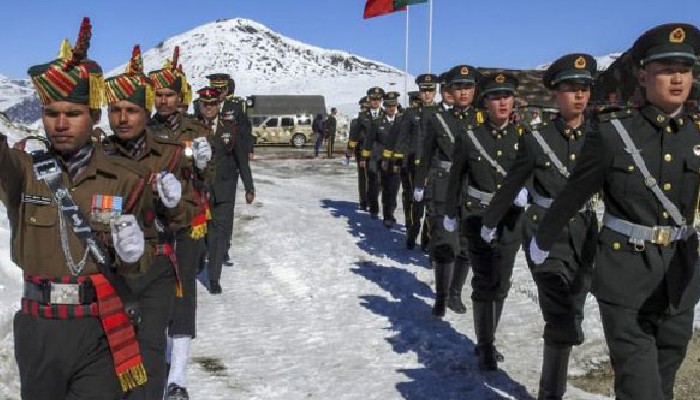 Especially after opening its economy in the 1980s, China had emerged as an economic and diplomatic powerhouse in addition to a military power. It was a respected nation until it began threatening its smaller neighbours over islands in the South China Sea (SCS), Taiwan over its claims of independence and India in Ladakh. It did appear that Chinese actions could be stalled but not stopped.

But then Chinese weaknesses came to the fore. Its’ nomination of Qi Fabao, a veteran of Galwan as a flag bearer in the Beijing Olympic games was to reignite nationalism which appears to be receding as China faces internal pressures. An assessment is that Chinese offensive designs are a cover up for its emerging failures.

Currently, the Chinese economy is losing its sheen. Caixin, China’s financial publication in an article on January 29 stated that 30 out of 66 real estate companies reported a loss in the current financial year, alongside a large number of Chinese fortune 500 companies. Even Chinese airlines registered major losses.

Lt Gen PR Kumar has in his article quoted former Chinese Finance Minister, Lou Jiwei, stating “Publicly available data does not show that about 4.37 million smallest businesses and micro firms folded up in the first 11 months of 2021. Only 1.32 million new micro and small firms opened in China during the first 11 months of this year, compared with 6.13 million last year.” PR Kumar has added: “The data is particularly relevant given that Beijing considers the micro and small firms the backbone of China’s private sector, underpinning the national economy.”

China’s failing diplomacy was evident when only 24 heads of state and dignitaries attended the opening ceremony of the Beijing Olympics. The backing out of India and the Saudi Crown Prince added insult to injury. Most who attended were indebted nations. The only exception was Russia. Chinese President Xi Jinping, himself worried about COVID had refused to travel abroad and meet leaders prior to the games. Chinese attempts to exploit the games to offset its Xinjiang and Tibet policies failed.

China is backing Russia over Ukraine, while the West is pushing against Russia. Chinese belief that the crisis would divide the US and EU appears to be wrong and in case of Russian actions, China too would pay for supporting Russia. As it is, its major trade deal with the EU is on the hold.

The release of a report by 'The Klaxon', an Australian investigative newspaper, highlighted the increased casualties in Galwan and running away of the Chinese troops in a disorderly manner, has exposed weaknesses of the PLA.

It is well established that the PLA Navy does not possess the capability of defending Chinese maritime interests, which can be exploited to impact China in the event of hostilities. Another factor impacting China is its aging population.

Last year, China had the lowest increase in its population since 1949. With an aging population, Chinese economic and military power will be severely impacted in the long term. As Claude Arpi, a French born journalist, writes, “China has many more vital issues to tackle (Taiwan, Hong Kong, Tibet, Xinjiang), but the economy and the problem of population seem the toughest ones to solve. The future of the Middle Kingdom seems bleak.”

Simultaneously, India is diplomatically pushing against China. Jaishankar’s recent visit to Australia for the QUAD summit and his public engagements indicate an offensive foreign policy approach. China has been highly concerned about the QUAD. It has repeatedly accused the QUAD of being an “exclusive bloc to create bloc confrontation.” Commenting on the recent QUAD meet, China’s Foreign Ministry Spokesperson stated, “(QUAD) is essentially a tool for containing and besieging China to maintain US hegemony. It aims to stoke confrontation and undermine international solidarity and cooperation."

Jaishankar speaking on the QUAD forum, hit back.He backed Australia against Chinese economic coercion, something India would never have done earlier. He stated, “You know that bit – if it looks like a duck and it walks like a duck …” China was forced to defend itself. Its Spokesperson stated in Beijing, “The label of economic coercion cannot be pinned on China. All attempts to gang up with others to misrepresent facts and resort to malicious hype-up are bound to fail.”

On Chinese actions in Ladakh, Jaishankar was far more direct. He stated, “The situation has arisen due to the disregard by China in 2020 of written agreements with us, not to amass forces at the border. So when a large country disregards written commitments, I think it’s an issue of legitimate concern for the entire international community.”

This assault from Jaishankar has come at the time when China is struggling to regain its diplomatic standing amidst poor diplomatic showing at the Beijing Olympics.

Reacting to Jaishankar’s statement, China’s Foreign Ministry Spokesperson commented: “On the border issue, China always maintains that we should follow through on treaties and agreements we signed, and we jointly uphold peace and tranquillity at the border region.” This was exactly what Jaishankar tore apart when he accused China of breaching agreements.

To hit China further, Jaishankar brushed aside Chinese objections on the QUAD. He stated, “We're about building, about building confidence and resilience, about promoting a region in which all countries are able to be and feel sovereign and secure without the threat of coercion or intimidation.” It was aimed at China. Added to this were remarks by US Secretary of State, Antony Blinken who stated that India is a “a driving force of the Quad, and an engine for regional growth and development.”

India had been discussing the sale of BrahMos missiles to the Philippines for some time, but always hesitated to go ahead with it as it was sensitive about China’s concerns. However, it recently pushed the sale and that too with the Russian approval, as both nations are partners in its development. Russian support implied that it will play both sides, China and India.

The reason why India is moving strongly against China is not unknown to the world. Firstly, lack of forward movement in talks indicates Chinese hesitation to restore normalcy, preferring a permanent standoff. Secondly, the Indian government is confident that it can deter Chinese misadventures. It has already displayed its intent to reciprocate. Thirdly, India considers itself capable of facing Chinese hybrid warfare attempts or responding to them. Fourthly, India has the backing of the global community including members of the QUAD. Fifthly, it is aware that China is losing its sheen and entering a phase of decline in economic and diplomatic spheres, while India is on the ascent.

India is no longer reacting to Chinese comments but reversing the scenario compelling China to defend itself. This approach displays growing confidence of India.

***The writer is a strategic and foreign affairs commentator; views expressed are his own