Issues we confront in Indo-Pacific can extend beyond region: EAM Jaishankar 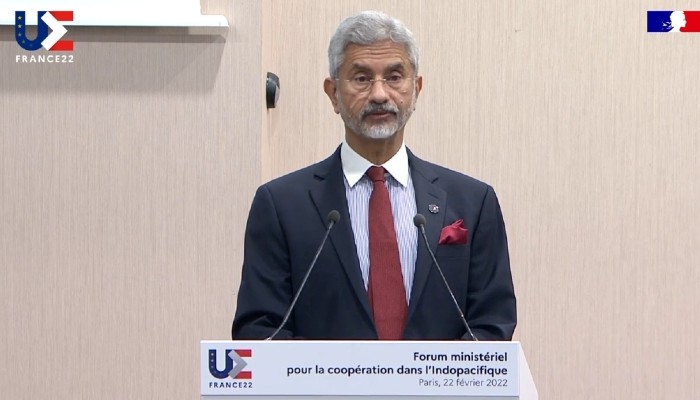 S Jaishankar speaks at the EU Ministerial Forum for Cooperation in the Indo-Pacific on Tuesday.

Indo-Pacific is at realm of the multipolarity and rebalancing that characterizes contemporary changes, he said

Highlighting the significance of the Indo-Pacific region, External Affairs Minister S Jaishankar on Tuesday cautioned the European Union (EU) that it is important to counter the hegemonic designs in the Indo-Pacific or else the forces of disequlilibrium can likely spread to Europe. He said that the region is at the heart of multipolarity and rebalancing that characterizes contemporary changes.

But it was essential greater power and stronger capabilities led to responsibility and restraint, which translates to respect for international laws and territorial integrity and sovereignty, Jaishankar added.

It also means economics free of coercion and politics free from the threat or the use of force and observing global norms and practices.

EAM Jaishankar made these remarks at the EU Ministerial Forum for Cooperation in the Indo-Pacific during his three-day visit to France.

Speaking at the opening session, he said, "Today, we see challenges with the clarity that proximity brings. And believe me, distance is no insulation. The issues we confront in the Indo Pacific will extend beyond even to Europe. We, therefore welcome, the EU's commitment to contribute to the security of the region.”

Noting that France was among the first countries in the world to recognize the strategic geography of the region, the minister said that France is resident power in the Indo Pacific. And by extension, so too is the European Union, he pointed out.

Jaishankar further noted that this remains a maritime century and tides of the Indo-Pacific region will help fuel the future. “Our collective efforts can keep the oceans peaceful, open and secure, and, at the same time, contribute to conserve its resources and keep it clean,” he added.

He further noted that EU’s strategy is consistent with India’s vision of a free, open, balanced and inclusive Indo-Pacific region, anchored in ASEAN centrality, as outlined by Prime Minister Narendra Modi in Singapore in 2018.

In security, France is already among India’s foremost partners. With EU too, we now have an enhanced partnership and operational level of access, he affirmed.

“On global challenges, the India-France initiative on International Solar Alliance now includes many European partners. India and France are also joining hands to launch the Indo-Pacific Parks partnership. We invite our partners from the EU and the region to join this initiative and reinforce our efforts aimed at conserving biodiversity in the Indo Pacific’” he remarked.

Jaishankar arrived in Paris on Sunday on a three-day trip after paying a two-day visit to Germany.

The EU Ministerial Forum on Indo-Pacific was organised by France in its capacity as chair of the council of the European Union. The evolving situation in the Indo-Pacific region in the wake of China's increasing military assertiveness has become a major talking point among global super powers.

Last year, the EU adopted its Indo-Pacific strategy intending to increase engagement in the region. Through the policy, the bloc wishes to deepen its engagement with partners in the Indo-Pacific to respond to emerging dynamics that are affecting regional stability.